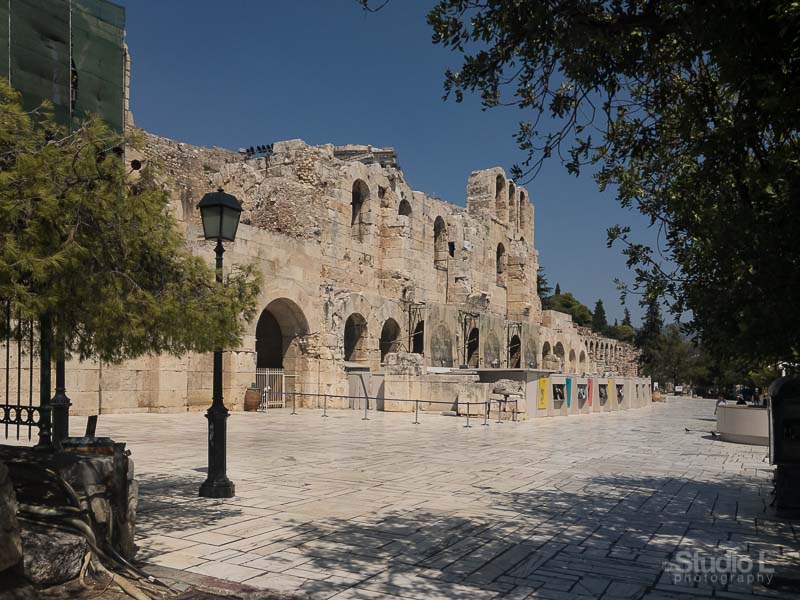 The Odeon of Herodes Atticus is a stone theatre structure that was built in 161 AD by the Athenian magnate Herodes Atticus in memory of his wife in the slopes of the Acropolis. Originally a steep-sloped theatre with a three-story stone front wall and wooden roof it was used as a venue for music concerts with a capacity of five thousand people. It remained intact until it was destroyed and left in ruins by a barbaric tribe called the Herulis who ravaged Athens in 267 AD. Today, it is one of the main music theatres of the city and offers ample opportunities for spectacle throughout the whole year. The audience stands and the stage were restored using Pentelic marble in the 1950s, the same quality marble that was used to make the Parthenon. Since then it has been the main venue of the Athens Festival, which runs from May through October each year, featuring a variety of acclaimed Greek as well as International performances. Artists who have performed at the Odeon include Maria Callas, Frank Sinatra, Luciano Pavarotti, Sting, Mikis Theodorakis, Elton John, Andrea Bocelli, Goran Bregovic, Manos Hatzidakis, Jethro Tull and many other important artists and organizations.