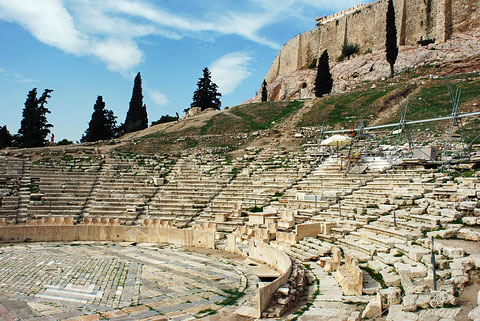 Strolling along the side of the hill, we come across our next stop. The Theatre of Dionysus is a major theatre in Athens built at the foot of the Acropolis. Dedicated to Dionysus, the god of plays and wine (among other things), the theatre could seat as many as 17,000 people with excellent acoustics, making it an ideal location for ancient Athens' biggest theatrical celebration, the Dionysia. During those cult celebrations of god Dionysus plays were performed. The plays were written by some of the great "Attic tragedians", men such as Aeschylus, Sophocles and Euripides. Fortunately, many of their plays have survived, which give us a unique insight into their thinking. It was the first theatre ever built and supposedly the birthplace of Greek tragedy. The meaning of the word 'tragedy' comes from the more serious Greek plays. These often concluded that mortals are at the mercy of forces (the gods, destiny, fate) far outside their control or influence. Like all historical sites, taking a few minutes to sit down and reflect on the history is a great way to appreciate the achievements of the ancient Greeks. Trying to visualize what a performance would look like at the time sitting next to Pericles, Plato and Aristotle makes the whole theatre come to life.